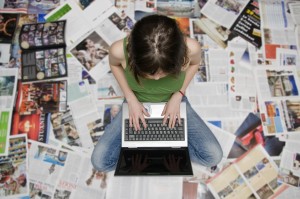 Well, where to even begin? We’re well into our spring semester and I have to tell you, I have absolutely no idea where the time has gone! I know they say time flies when you’re having fun, but is it acknowledged somewhere that it also flies when you’re beyond frazzled, stressed, and drowning in homework?

If not, let me be the first to declare it here in this blog post.

I have a few friends that started out this semester with high hopes: homework in early, studying every night, well organized group projects, the whole deal. I will admit here that I was one of those people.

Since beginning classes, not one of those goals has been reached, as of yet. Especially the group project one; in one word, overwhelming.

So, if you’re like I am and trying to figure out the best way to operate in a group with so many factors against you – for instance, the lack of face to face communication, differing time zones, etc., here are some words of advice from yours truly.

1. Use Your Computer Screen As Your Referee

Having a screen in front of you probably seems like a disadvantage, but it might possibly be the best thing you’ve got going, when the going gets tough.

Now, that might seem counterintuitive, but let me explain. Personally, I do not like to mince words. I’m more often than not very direct and honest. If something is stressing me out, I will address it. If I think I should be speaking up, I will. With this in mind, imagine someone like me trying to function in four different online group projects, all of which are comprised of extremely varied individuals, with their own ideas of what the best course of action is.

Needless to say, it’s no walk in the park.

At first I was aggravated, annoyed, sometimes laughing because I was so sure what I wanted to do was right.

I would type out responses, some less polite than others, thinking that if I could just get my point across, in whatever direct way I needed to, things would be fine.

Well, groups don’t work that way, especially when emails can’t convey inflection in voice, flitters of emotion across my face, the way that I probably sound way more authoritive in writing than I ever will in real life.

So, I back-spaced those responses, and changed my attitude. I took a step back, and tried to see things in a new light. And what I found is this:

My laptop screen acts as a much needed referee. It forces me to look at things first, and react in a more thought-out way, as opposed to being in front of someone and becoming frustrated instantly.

It is the silent friend that shakes their head no when I want to mouth off. It is the flashing screen on the side of the street telling me I’m going too fast, and need to slow down.

My screen has become my best asset in trying to function in so many different projects, and for that I am more thankful than I can accurately express.

So, in sum, love your computer! It will (hopefully) save you from impulsively reacting to fellow group members.

One of the things that I love about World Campus is how diverse it is. I’m literally Skyping with people across the world, finding common ground with them, and expressing ideas and plans for the future.

This is something I could never do on campus, as everyone there would have to live in the same general area. With this in mind, it is so important to remember that with all good things comes a price. Here, it happens to be differing time zones.

I’m here, she’s there, and he’s here, but will be there in a couple of days…it changes all of the time! At first, this was another overwhelming aspect of trying to perform in so many groups. I had no idea how I would be able to meet someone across the country at a time that worked for both of us, factoring in work, and general life.

Well, somehow it has. And while I don’t know the exact reason why, I’m going to attribute it to the enormous understanding all of my group members have developed in relation to this dispersion. We’re all in the same boat. And we all realize that to be successful, we need to work past our differences and focus on how to achieve and maintain our sameness.

If that means one day I skip eating dinner after work and spend a few hours meeting with a group member who just put her kids to sleep, I’m fine with that. Likewise, if someone in a different group is willing to spend a night filling me in on something I missed, I chalk it up to that same understanding and successful attitude that I try and apply to my actions.

So point two, don’t forget that other people are just like you, and that to be a part of a group, a team really, you have to be a team player.

I’ll be the first to admit that working in groups isn’t always easy, especially for someone like me. But I will also follow that moment of truth up with a big “So what?” and discuss with you the two points above.

Penn Staters, we’ve got this. Sure, several weeks of the semester are gone, lost perhaps in the Twilight Zone. But we’ve got each other this semester, so let us utilize our collective resources and keep up the good work.